On our travel through Indonesia, did we often find it very fascinating, how the local people live their lifes, in the small villages. It feels like stepping back in time, where they live the simple life as we did for maybe a hundred years ago in Denmark. They live together in harmony with the animals; chickens, goats, cows and pigs etc. They are farming their land with rice, coffee, corn and bananas. The whole family are living together and helping eachother with the work around the house. It’s amazing to see just a small part of their lifes, when we are driving through the villages. The rusty metal roofs glittering in the sun. Newly washed clothes drying in the sun on bushes and hedges around the house. Most places they have really nice houses built of bricks, and you’ll always see a big satellite outside the house, which may be one of the only signs that we are living in the 21st century.

We had many questions about this way of living. Is it a good life for them? Are they happy? And how poor are they actually? We have been very interested in getting to talk with some of the local village people, to get a better idea about their way of living. When we drive through the villages on a motorbike, everybody is looking and waiving at us. They find it very funny that some white people wants to visit their village and are interested in their lifes, and they have just as many questions to us as we have to them.

We were very lucky to meet this local man, Sebastian, in the town of Bajawa on Flores. He gave us a ride on his scooter and helped us find a good homestay. He was very happy and talkative, and after talking with him for several hours over a bowl of soto ayam (a fantastic indonesian chicken soup), about us and our travel and also about him and his life in Bajawa, he asked if we would like to come and visit his familys house. They live in a small village called Bonewaru in Langa just outside of Bajawa city.

We ended up living with him and his family for a whole week, where we were a part of their daily life. And now we want to share the experience and all the information we collected, with you.

This is the family

Father, Petrus Wigo, 67 years old. Never went to school, but learnt the way of life by a dutch pastor who stayed in their village to teach about catholism.

Mother, Maria Dhoga is 65 years old and she never went to school. Together they have 7 children;

Hendrik, the oldest son, lives in Denpasar on Bali with his wife and children.

Irene is the oldest daughter, she is a teacher in a primary school. Her husband is dead, so she lives now in her parents house with her daughter Lauren, who is 14 years old and is a student on the local school.

Petronela lives in the capitol Jarkarta with her family. The daughter Helen who is 18 years old lives with her grandparents in Langa to study highschool.

Sebastian is 36 years old, single and lives at his parents house. He works as a Ojek (scooter taxi). He have earlier lived on Bali for 10 years together with Bertoldus.

Bertoldus is also single and lives at home.

Selfira lives in the same village in a house with her husband and 3 young daugthers. She have earlier lived in Italy to become a none.

Benedikta, the youngest daugter is 31 years old and lives at her parents house. She works in periods in Jarkarta, but mostly helps her mom in the house.

It is very normal to have many children, between 5 and 10 is the most common. Then there’s a better chance that some of them will get a good job as for an example a teacher or tourist guide or even end on a longer education on Java, and can provide money for the family. There’s also a better chance to get many grand children, who can make sure the family will continue. The older children can take care of the younger ones, and they will never be alone.

One of our big questions were, how the family gets the money for living? What is their income and expenses? And how do they for an example pay for the childrens school?

This is very interesting that almost all families can afford to have their children in school until 6. Grade. But as soon as they turn 12 years and have to start in secondary school, it can be a struggle for many families to find the money. Luckily for Lauren, her mom earns just enough so Lauren can continue school until 9. Grade. The family still doesn’t know if there will be enough money to put Lauren in highschool. Helen’s education is financially supported from her mother, who lives in Jakarta, so she is lucky to be in highschool now, and maybe even continue to university.

Sebastian who works as an ojek earns 10.000 IDR every time he drives a tourist from the busterminal into the city. He rents the scooter from his father. He also have a deal with a few hotels, who gives him 300.000 IDR pr. month for petrol, if he brings tourists there. The few money he earns goes directly to the familýs food budget.

The main income comes from the four pigs that the family owns. One pig is worth around 8 million IDR after three years of feeding and caretaking, and they sell one per year. It is the fathers job to feed and take care of the pigs, including collecting the food and the firewood to cook it. The 8 million should last for one whole year and cover everything in the household. It is mama Maria’s job to control the budget. First of all the money will go to buying a new small pig to raise for the next three years, so the money will keep coming every year. Then there’s the electricity bill and the cost of renting their land. They collect rainwater in a big tank and boil it for drinking. But in the dryseason they sometimes have to pay for a watertruck to come and fill it up. The rest of the money mainly goes to all the food which doesn’t grow in the garden or in the jungle, such as; rice, oil, eggs, sugar and coffee.

The population on Flores is mainly catholic. They go to church every sunday and every small village have their own church. In Bonewaru the mess was 6.30 in the morning and again at 9 o clock. Everybody from the village attends the mess, including children and elderly where everybody shows up in their finest dress. Only if you are sick or can’t walk you are allowed to stay home. Sunday is a holy day and nobody is supposed to work.

There is many old traditions in the village community. Even though they are catholic by religion, they also believe to pay a big respect to their ancestors. When two people get married, the tradition says that the husband have to move into the wife’s familys house. If the house isn’t big enough for everybody, he will need to build a house for her. First he will build one out of bamboo and then later when they can effort it, he will build a new house out of bricks. Everytime a new house is being built, the old tradition says that they have to sacrifice a buffalo and invite the whole neighborhood to the ceremony.

The children and the school

There is one local school in Langa village, called SMP Santo Agustinus Langa. We were invited to visit the 8. Grade where Lauren is. The schoolday starts at 7 o’ clock every morning from Monday to Saturday, and they finish again at 12 o’ clock most of the days. The children are all wearing school uniforms and the teachers also wear matching shirts. We attended an english class, where we first was sitting in the back of the classroom and observing, and in the end of the class we teached the children a little bit about Denmark and ourselves.

From 7. Grade they will start to have english classes for 4 hours a week. The way of teaching reminded very much about home, even though the teacher didn’t speak perfect english, he used a good teaching book and did all the exercises. It can be difficult for the children to learn english, because the teacher have to translate it from Bajawa, their mothertounge, into Bahasa Indonesia and then into english.

The children of the village learns to take care of themselves and each other. They learn to entertain themselves, playing football or play with a homemade car made of a stick with a wheel on the dusty road. There’s absolutely nothing called overprotection here – they learn from their own mistakes and from the bruises they get. Therefore they will become much more hardcore, solid and cool children. They always seem very happy and smiling, and never shy to talk with you. We can see how they really learn to appreciate what they have.

So is the simple life a good life?

What we can conclude after living one week together with the familiy, is that they actually seem to have a very good life. They have everything they need; a house, food on the table every day and eachother. As long as no one gets sick or something brakes, everything is good. But if for an example a family member gets seriously sick and need to go to the hospital, they wouldn’t be able to afford it. Then they would get all the help possible from family members and people from the village.

In general they seem to be very happy, they’re always laughing a lot together. The most important for them is to be healthy and to have eachother close. It’s clear to us how they really manage to appreciate the little things in life and be happy for what they have. A simple life is maybe better than a complicated one?

They were all very happy to host us and to show us their home and their life in the village. Their hospitality was great and we really appreciate that they let us in and gave us the chance to learn so much from them.

Thank you Sebastian and the rest of the family, we will never forget this experience. 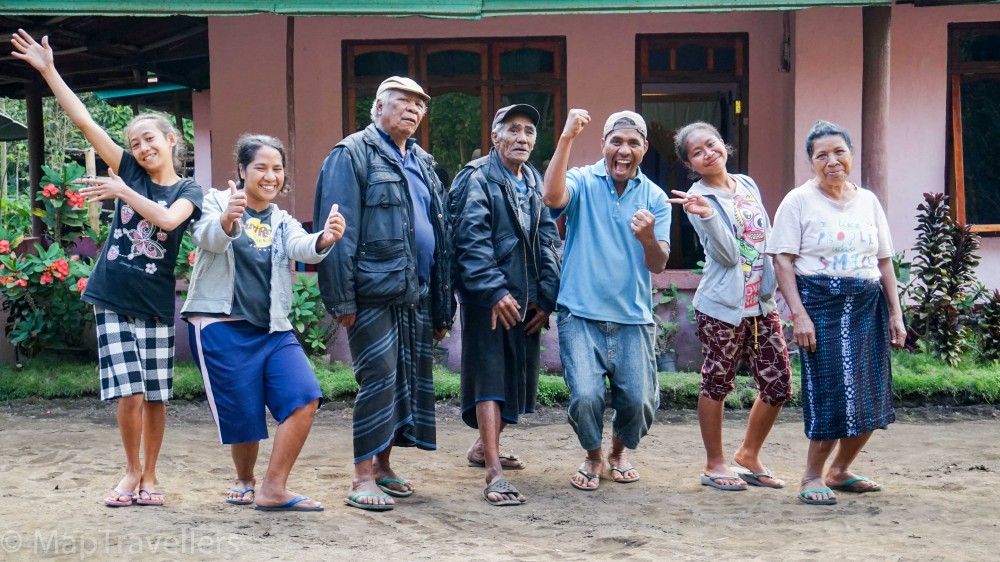