WARNING: This article contains pictures that is not for the faint hearted!

A warm saturday christmas night, me and Cecilie were sitting on the frontporch and having a drink. Cecilie had to go to the toilet, so i wanted to make a call for my family to hear about their christmas evening. Just as i was sitting and talking with them, i saw a group of 20-30 impalas come running into the perimeter. They were running close to eachother and very fast as if something was after them. I told my family ”that’s weird, they normally dont run through here at night”. And just when i said that, a big cat appeared next to them. The cat jumps up in the light, out of the lightbeam and catches an Impala. I heard a big cat roar coming from the cat and it woke up the monkeys in the trees around it. The monkeys started to go crazy and made a big warning noice to other animals in the bush. I got pretty surprised and went straight inside. I didn’t quite see the catch itself but i wasn’t in doubt. The cat must have catched one of them. I quickly found Cecilie and told her about the incident. My adrenalin was pumping and the outside didn’t feel safe all of the sudden, but Cecilie calmed me down. And then a big Solifugae of course came running over the floor just to scare us even more. It’s just typical the bush. We quickly found a torch and looked if we could se something but anything wasn’t able to be seen. We were actually on our way to bed, so after we were okay again and had talked about it, did we go to sleep.

When i woke up the day after, i just couldn’t stop thinking about the animal attack right in front of me. I told Cecilie that we should check out the crimescene and go directly for a walk in the bush afterwards. We got up and went out for a walk. I took Cecilie to the place i saw the cat jumped and definetly, something happened there. 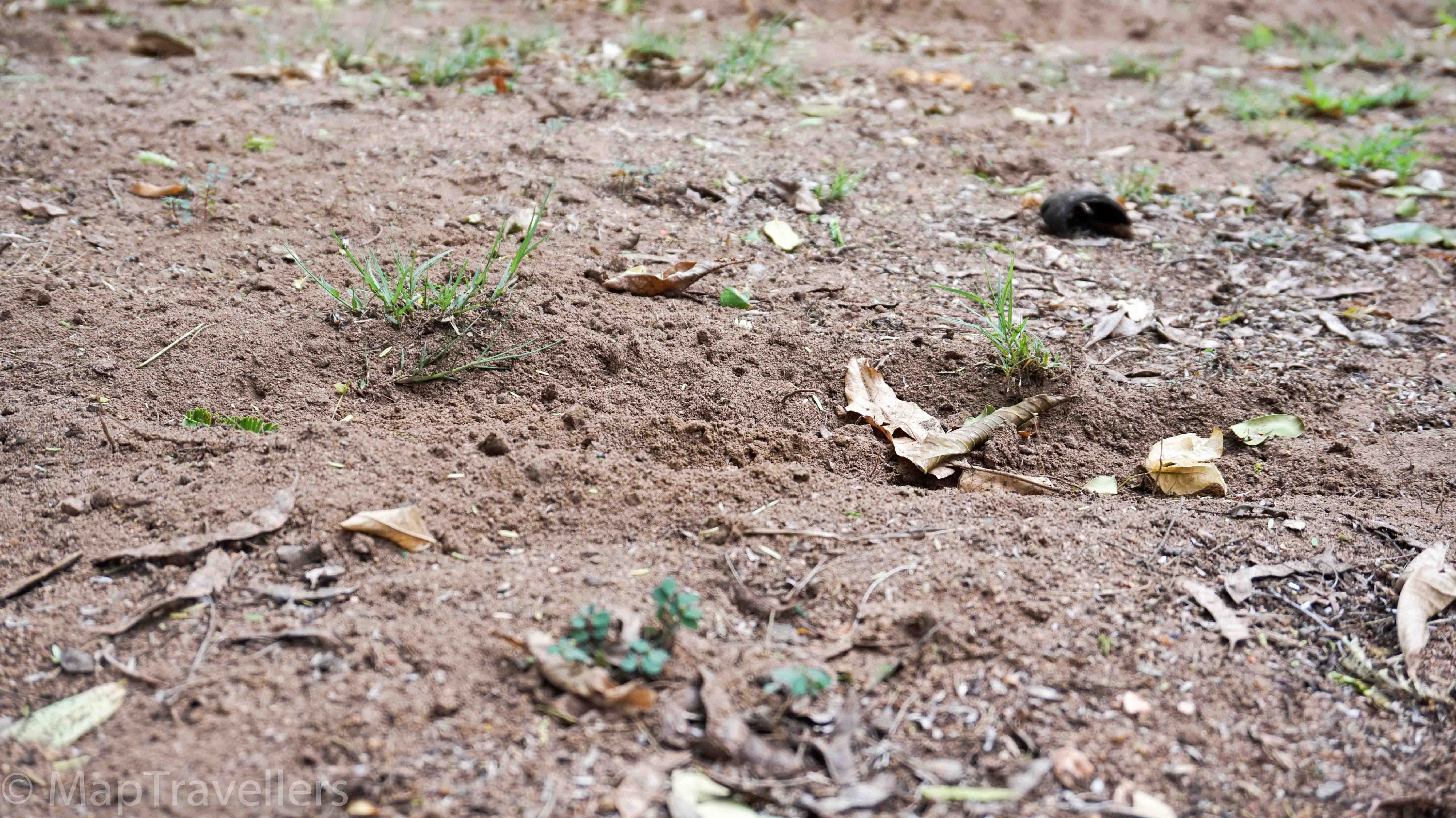 There where long stretches in the sand like something had tried to set the feet down for a jump. You could also see the Impalas footprints and how deep they were pressed to the ground, they really ran fast. Just after these stretches, we could see that something has lied down behind a bush just beside the jump. 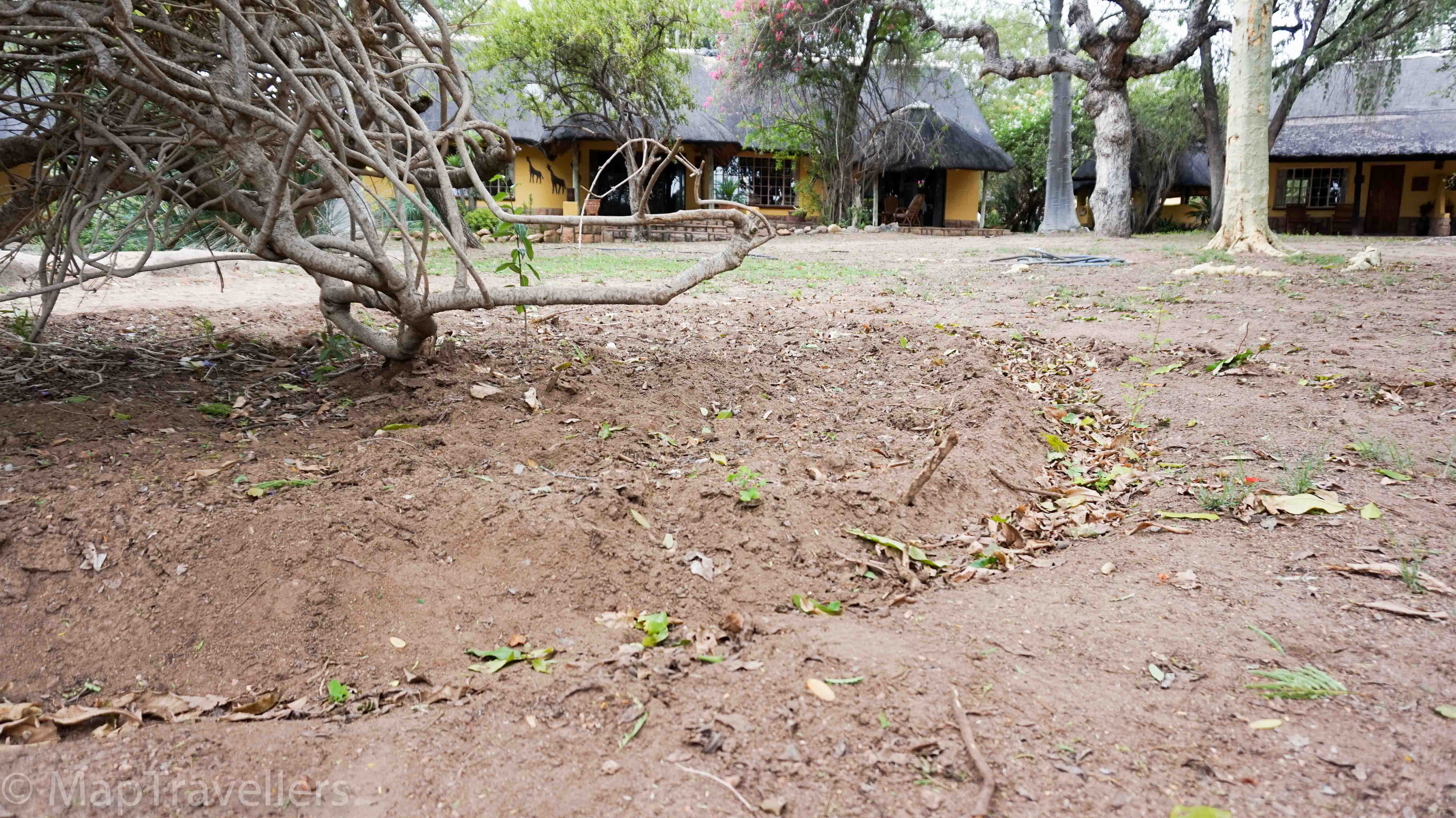 The cat has been hiding from us and strangling its kill. It has been looking right at us while the kill was going on, to make sure we didn’t disturbed him.

We took an extra look at the way i saw the Impalas ran off to. I could definetly see that something has been dragged this way. We followed the trail, out of the farm area and in to the bush. 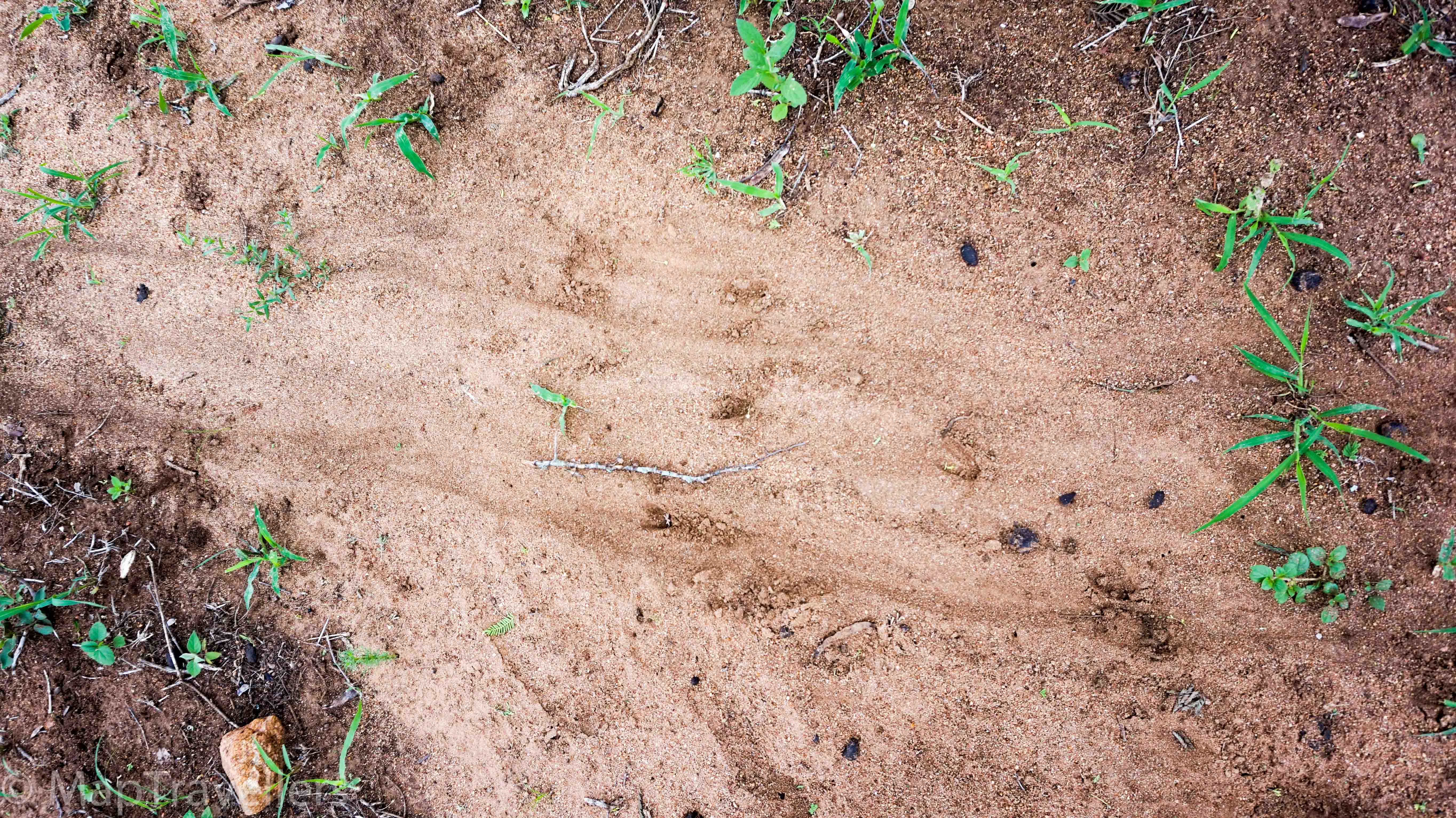 The trail was very clear to see and no doubt something has dragged something heavy. At this point i was still not sure about what exactly i saw the night before, because it was so dark. I only knew that i heard a cat making a raw and i saw something jumping. 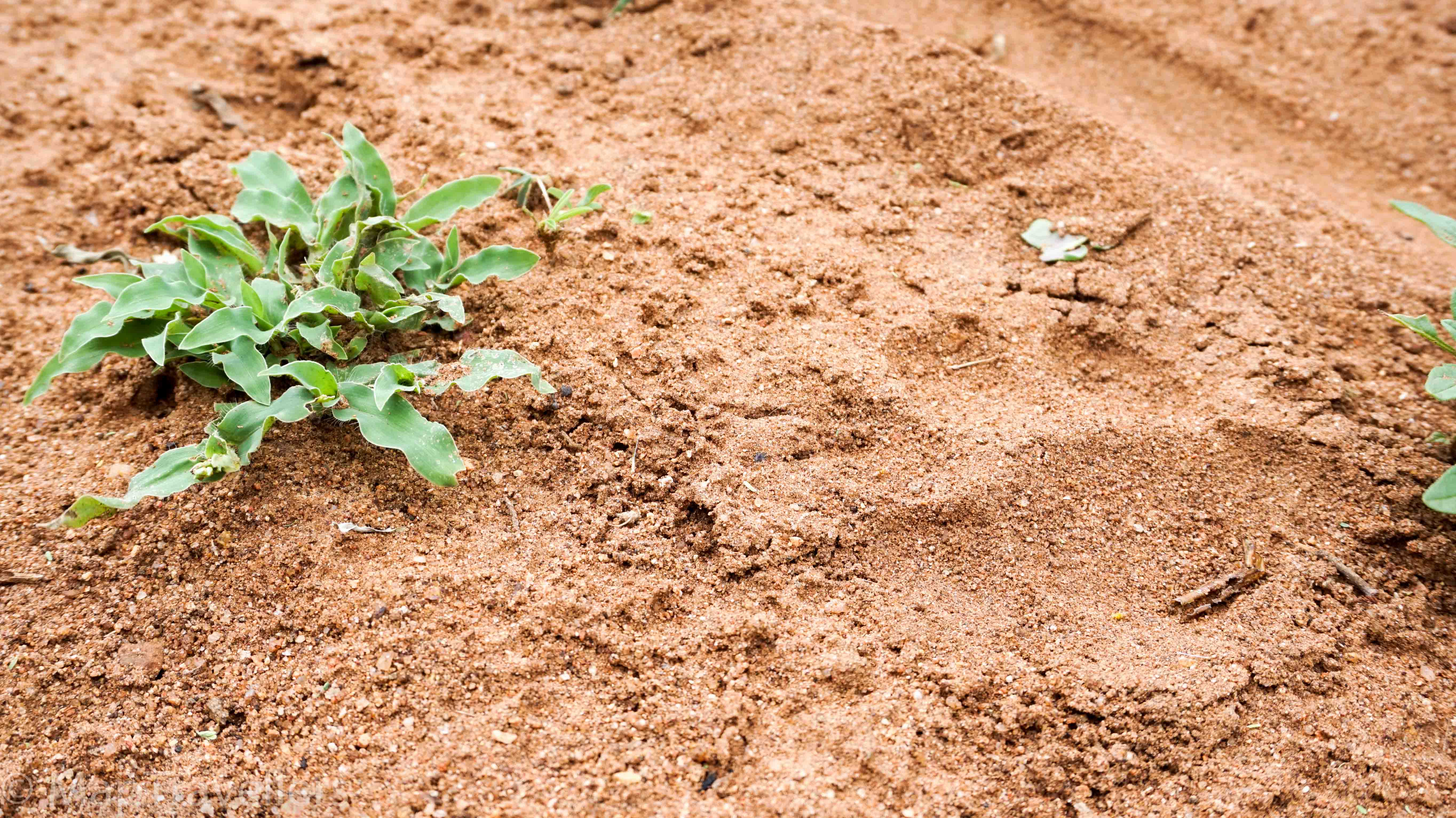 We walked along the trail, and then we finally found the footprint of the killer. You could clearly see the 4 toes, the big paw and no claws were contracted. It was definetly a Leopard. We smiled to each other and everything got even more exiting. We followed the trail earlier on through the bush and saw a lot of footprints from the Leopard, until the trail ended. 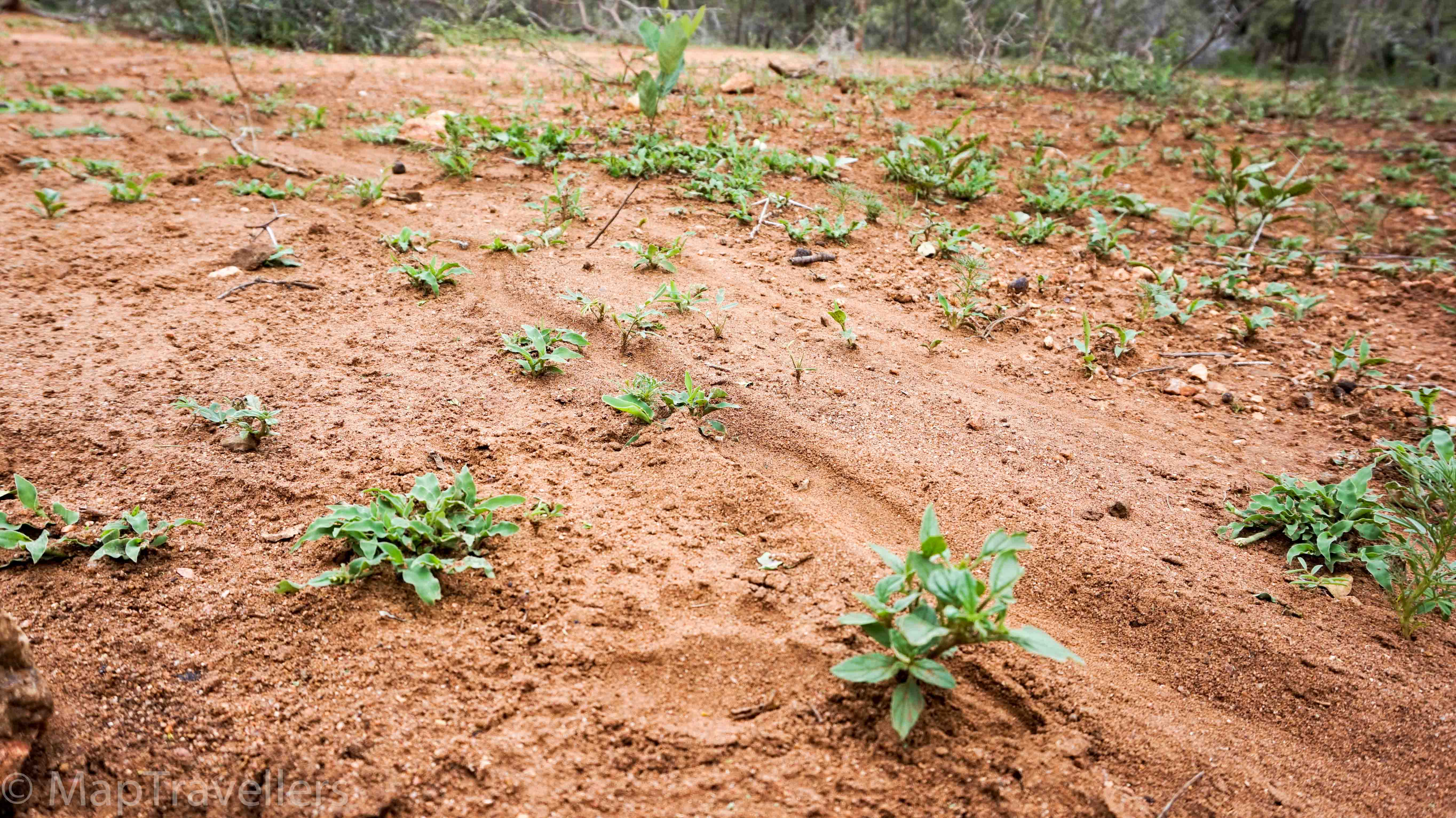 Then we found the place were the Leopard had cleaned the kill. 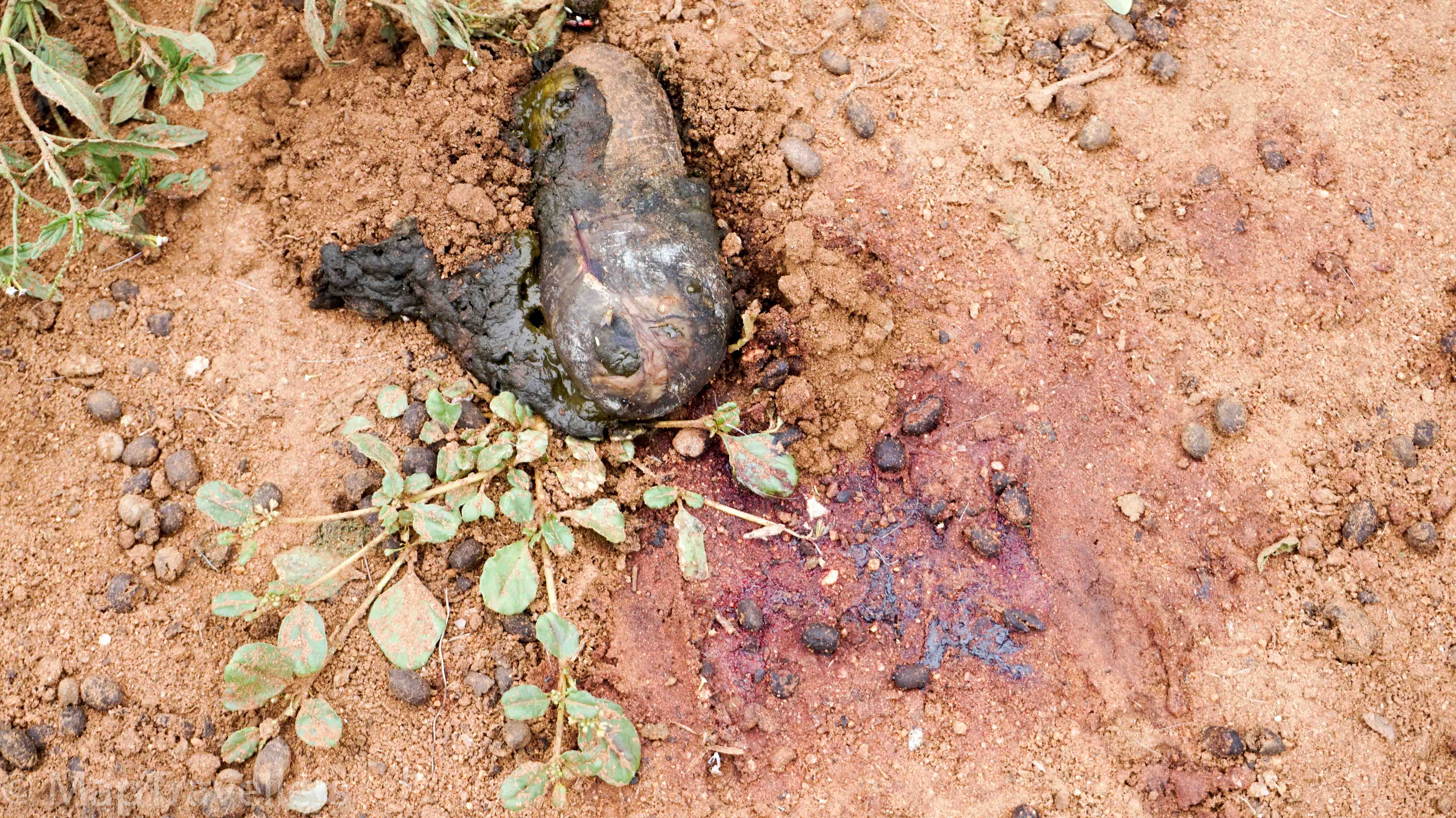 Guts were lying around, and you could smell a nasty smell of rotten flesh. 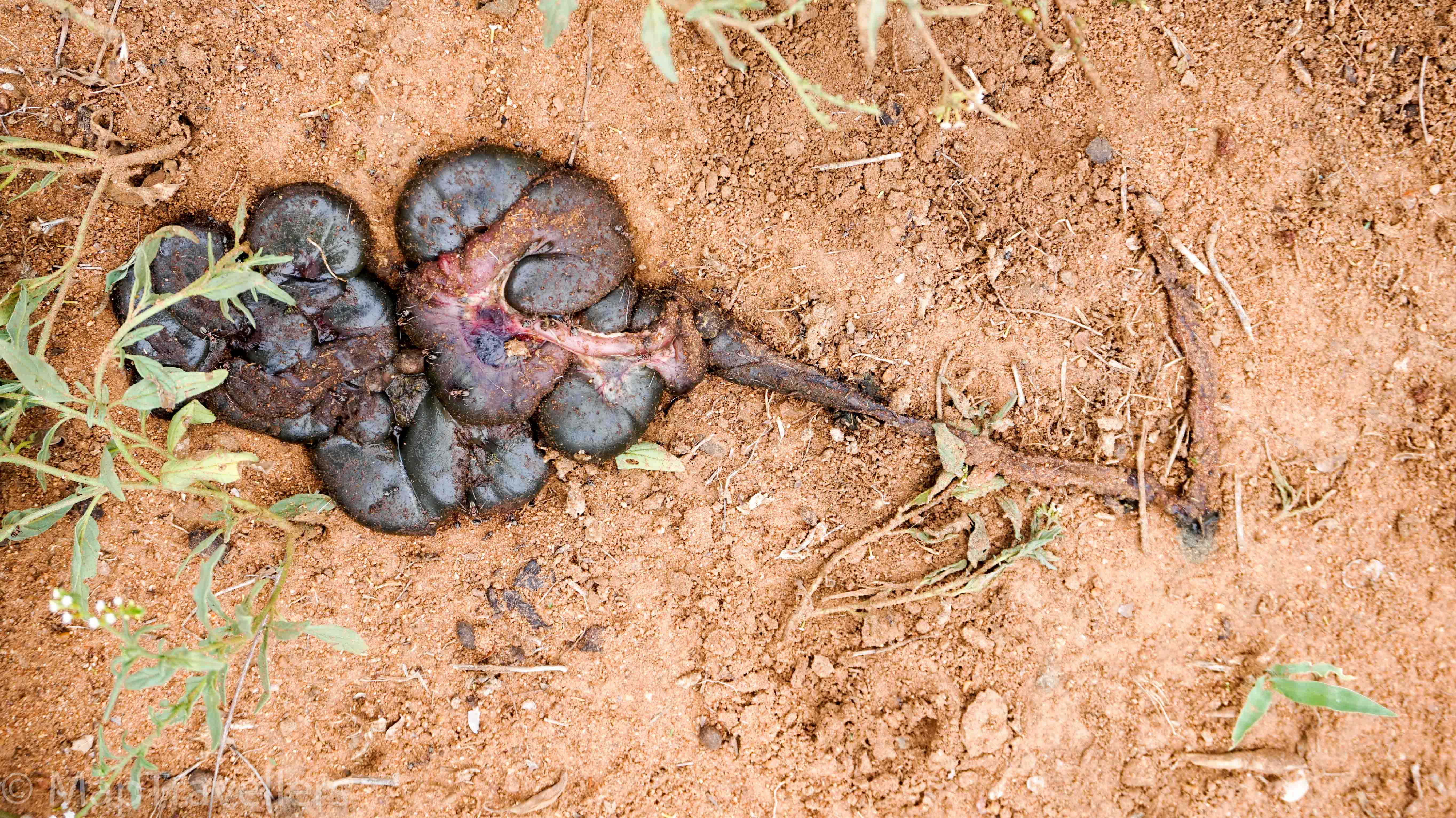 But something wasnt quite right here. The trail didn’t continue in one way, something had disturbed the Leopard. The trail after here were scattered, like more animals have been there. We looked around the cleaning area and found some other footprints. It had 4 toes, a paw and contracted claws. This was Hyena tracks and many of them. The Hyenas must have overmanned the Leopard and the Leopard has then been forced to run away and give up its dinner. We tried to look further on for some of the trails but the trails ended often in nothing. We looked a lot around in the bush, but did only find old bones from Nyalas and other Impalas. We said to eachother ”why not just go home, there is nothing more to find unfortunately”. We began to go back, but then we came across a very clear trail right in front of us on the road with Hyena footprints. 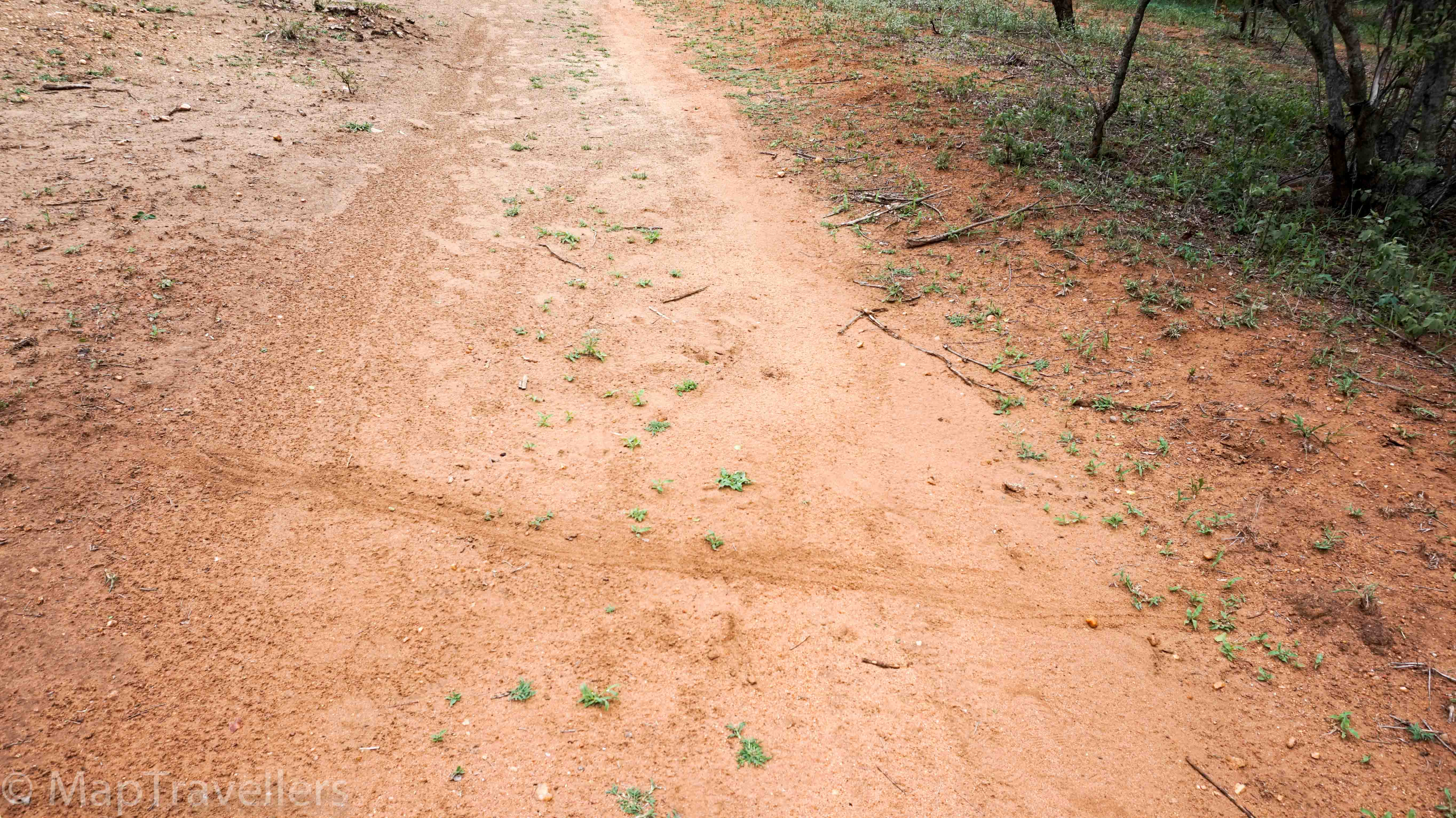 We tried to follow this trail and was surprised to find one of the places were the Hyenas have been eating the Impala. Some leftover meat was lying around and a lot of blood was spilled. 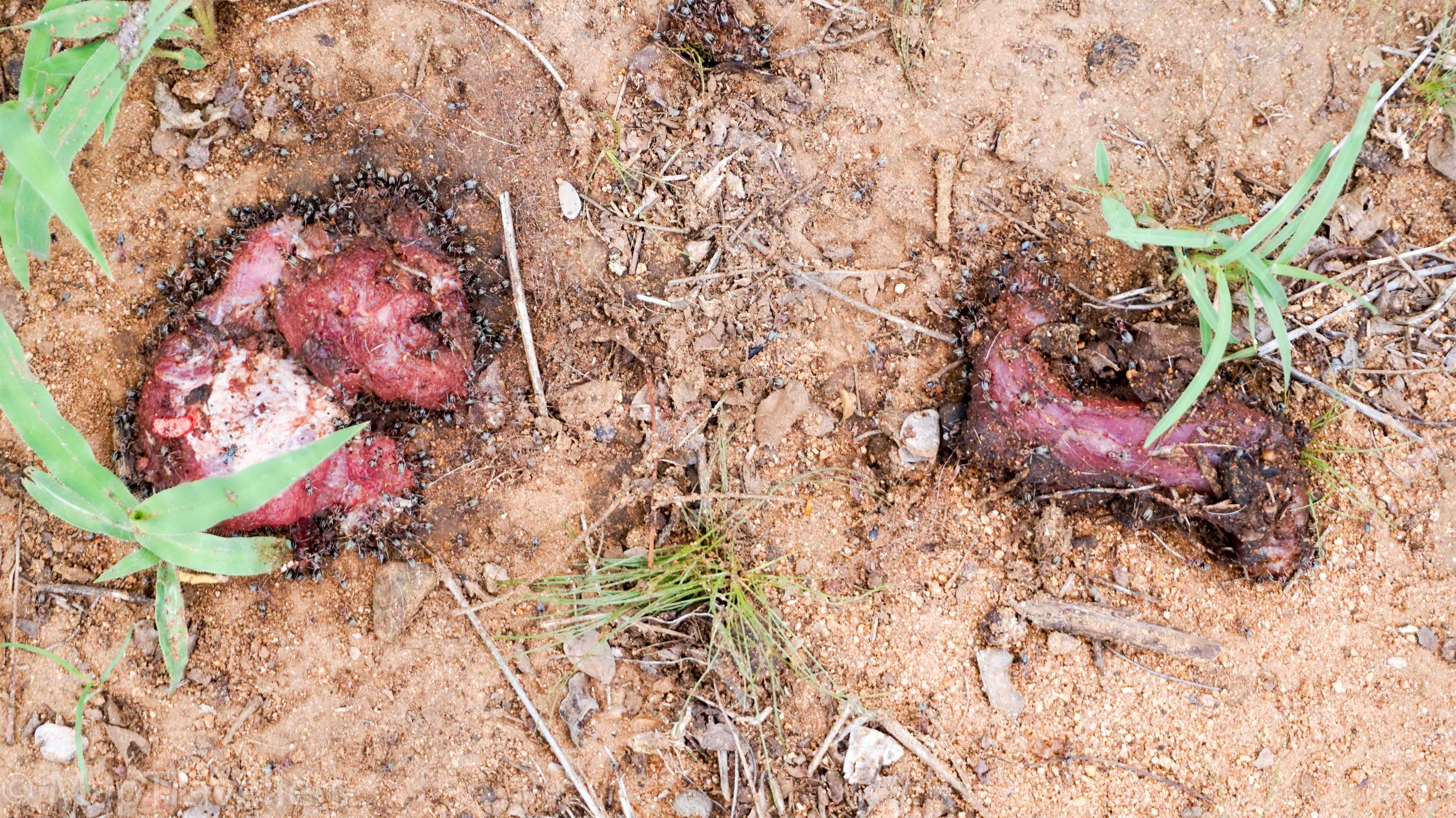 The best evidence was though the pelvis from the Impala lying there, still with fresh blood and flesh on, getting cleaned up by a lot of ants. 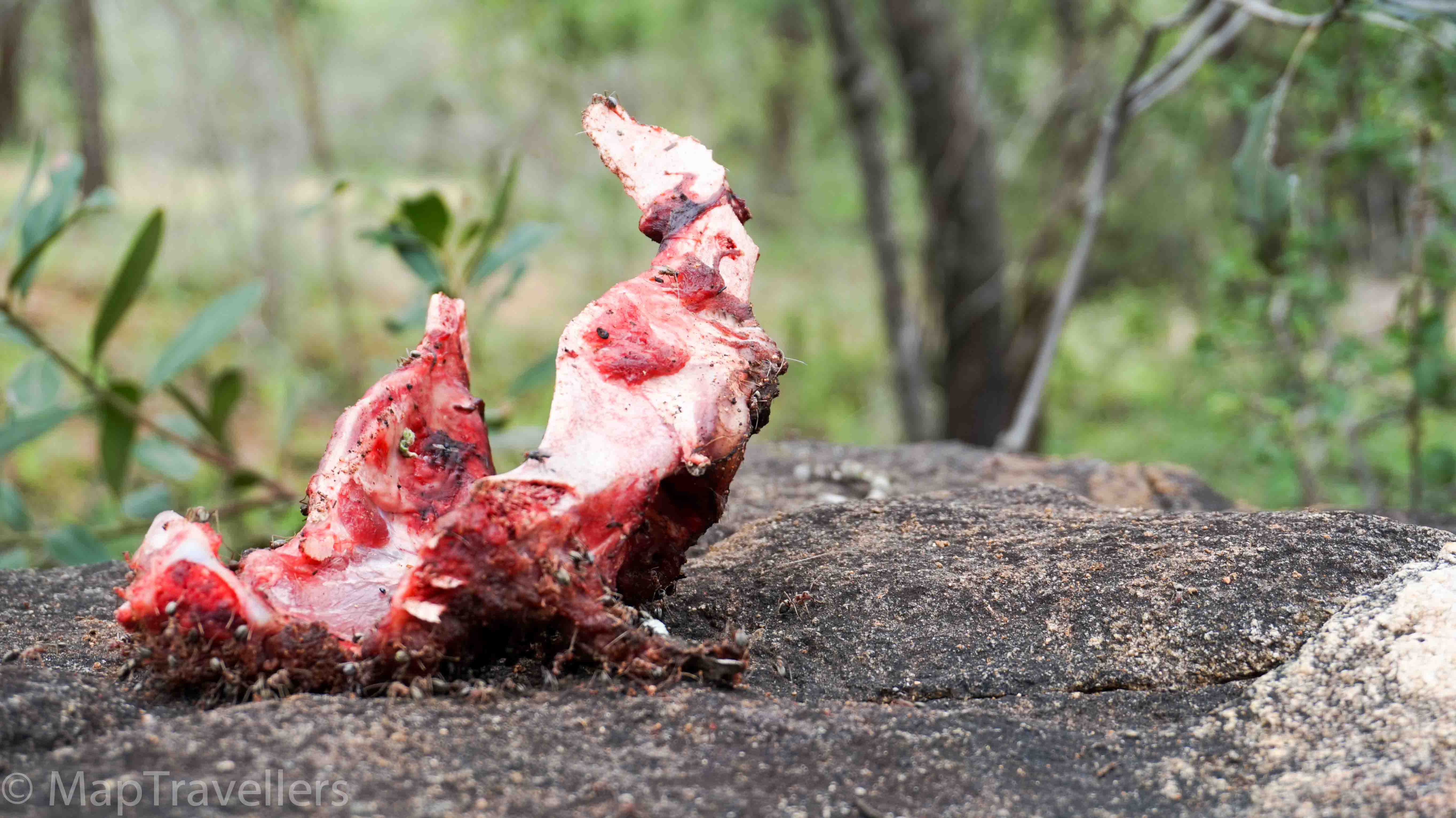 It was so amazing to just walk trough the bush and finding these trails, by ourselves. And to feel the whole struggle there have been between the different predators over this Impala kill this night. On the way back we almost got lost in the bush, but mannage to find our way back to the farm in the end.

An amazing experience to get on the 24th of december, christmas eve. This whole experience have blown my mind over how powerful the bush is and how little we as humans are in the vast nature. This was a once in a lifetime experience for me, and i know that very few people might experience a thing like this. I think i will never see anything like it again.

If youre in to the wildlife in Africa then check out our gallery from the bush here!